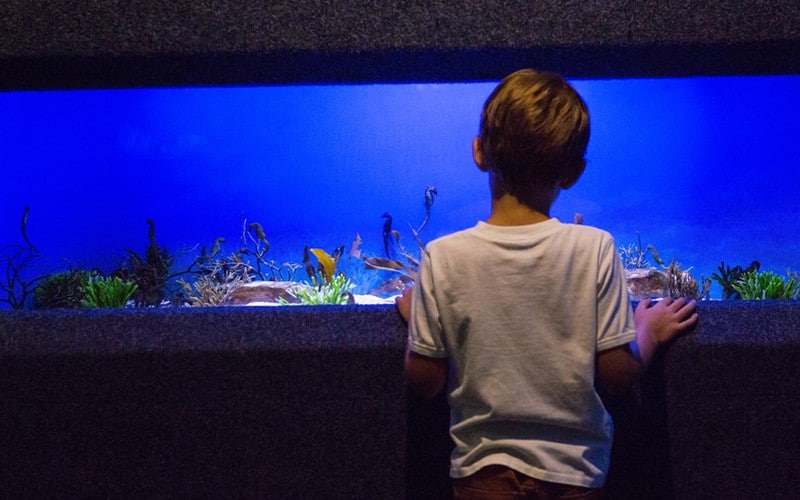 Betta fish have reputations for being territorial and aggressive fish, and the big question is “can betta fish live with other fish?”

While there is some truth to this rumor, there are some fish who should be just fine living alongside a Betta.

Here are 14 fish that can live with a Betta, followed by 10 fish that CANNOT.

Yes. Although Neon Tetras have a flashy appearance, they are non-confrontational schooling fish who will spend most of their time in the middle of the tank. Bettas are known to stay closer to the top, so they shouldn’t get in each other’s way. 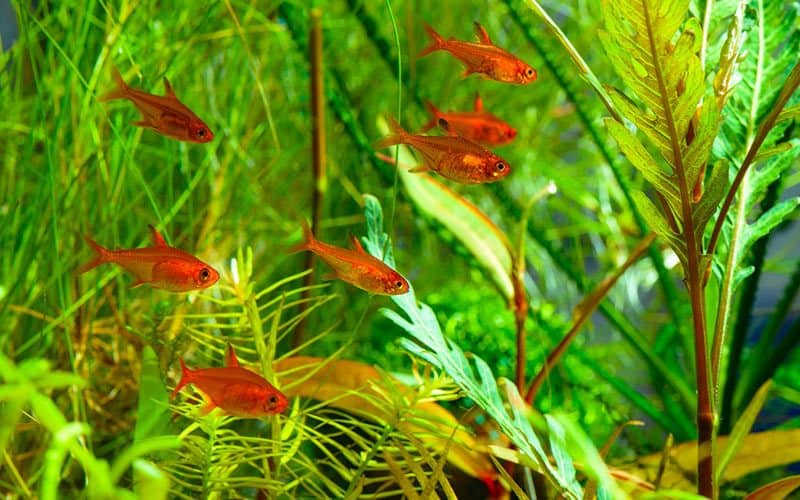 Yes. Like Neon Tetras, Ember Tetras are schooling fish who prefer swimming in the middle of the tank.

Yes. with their shy nature and “dull” appearance, a Bristlenose Pleco should have no problem living in harmony with your Betta.

However, it’s important to note that they can grow up to 7” long, so you will need to make sure your aquarium is large enough for them first.

Yes. If a Bristlenose Pleco is too big for your aquarium, you might want to consider the Clown Pleco. They grow to be around 4” in length and will have no problem cohabitating with a Betta because they keep to themselves.

Yes. If your aquarium is 10 gallons or more, Harlequin Rasboras are peaceful shoaling fish that won’t bother your Betta.

Note: They prefer living in groups of 5-6 and can live up to 5 years.

Yes. Glass Catfish are translucent (Fun Fact: You can see inside of them) and peaceful fish. They shouldn’t pose a threat to your Betta, but they do prefer living in small groups.

Yes. Corydoras Catfish are a safe choice to keep with your Betta. They are non-aggressive bottom feeder fish who will stay out of your Betta’s way.

Corydoras Catfish are easy to care for and live in the same water conditions as a Betta.

Yes. If Corydoras Catfish are too big for your aquarium, these guys are a great compromise. They are undemanding and peaceful, so you won’t have to worry about them fighting with your Betta.

Yes. You might have heard that Guppies aren’t good tankmates for Bettas, but that is referring to the Fancy variety (more on them below).

Originally bred to feed larger fish, Feeder Guppies have a non-flashy appearance that won’t intimidate a Betta. If aquarium space is a concern, a single guppy will be fine on their own.

Yes. Kuhli Loaches keep to themselves and have a docile temperament, so you should have no problem introducing one to your Betta. As an added bonus, they have a cool eel-like appearance and like to sneak between crevices.

Note: The minimum amount of space required for a Kuhli Loach is 20 US gallons.

Yes. African Dwarf Frogs are known for their peaceful personalities making them suitable tankmates for Bettas.

Preferring to live in groups of two or more, African Dwarf Frogs are relatively easy to care for. Better yet, they are interesting to watch and have no problem adding personality to a community tank!

Yes. Ghost Shrimp are see-through Invertebrate that shouldn’t have trouble living with most Bettas. They tend to keep to themselves but will have no trouble hiding if they need be.

Ghost Shrimp require little maintenance, are inexpensive, and will even help keep your tank clean!

If you prefer, Amano Shrimp are a good alternative to Ghost Shrimp, but they are usually pricier.

Yes. If you don’t want to risk adding another fish to your aquarium, a Mystery Snail is a great alternative.

Mystery Snails are easy to take care of, they will feed themselves by picking up algae or uneaten food.

They also don’t reproduce asexually, which is something to appreciate if you have ever had the misfortune of picking up Pond Snails from buying live plants for your aquarium.

Mystery Snails have unassertive personalities and even come with their own armor in the form of a hard shell if your Betta ever tries to nip at them.

Can Zebra Snails Live with Bettas?

Yes. Like the Mystery Snail, Zebra Snails will live peacefully with a Betta. They can’t reproduce in freshwater, so you won’t have to worry about a population explosion and they’ll keep themselves preoccupied with algae and leftover food too. 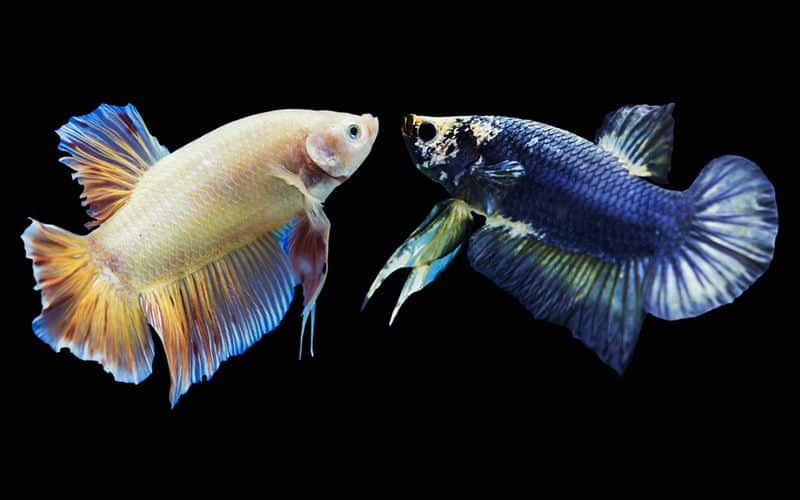 Mostly no. Male bettas can never live together. A male and female can cohabitate for mating purposes but will need to be separated after the male takes the female’s eggs.

Females can live together in a sorority (group of 5 or more female Bettas), but there is no guarantee that everyone will get along. It’s recommended that you start your sorority with young Bettas and have plenty of hiding spaces in your tank.

Can Guppies Live with Betta Fish?

No. Fancy Guppies can’t cohabitate safely with a Betta due to their colorful and fancy appearance. Additionally, their small size makes them an easy target and they can be easily killed by a Betta.

Can Angelfish Live with Betta Fish?

No. Angelfish are aggressive and will have no problem fighting with your Betta. This combination can easily lead to severe injury or death for both fish.

No. African Cichlids are aggressive and will fight your Betta for territory ownership. Your Betta has delicate fins that will be easily injured during a fight, putting them at risk for disease or severe infection.

Can Discus Live with Betta Fish?

No. Although Discus Fish are shy and would keep to themselves, they have significantly different water condition requirements.

Discus Fish live in soft water with a pH value between 4.0 and 7.0. To compare, the preferred pH value for a Betta is between 6.5 and 8.

No. While we agree they are beautiful fish, they are not a suitable tank mate for a Betta.

Members of the Cichlid family, Oscars are known to be big fish. By adulthood, they can reach 3 lbs in weight and 3 feet in length. This makes Bettas the perfect snack-sized treat for an Oscar!

No. Don’t let their small size fool you, a Dwarf Puffer can destroy a Betta’s fins. It’s recommended that they live in species only tanks and even then, the results can be hit or miss.

Can Goldfish Live with Betta Fish?

No. There are many reasons why this is a terrible idea. The first one being, Bettas are tropical fish. They like to live in water that ranges from 78 degrees F to 80 degrees F. Goldfish prefer colder temperatures; between 68 degrees F and 74 degrees F is ideal. 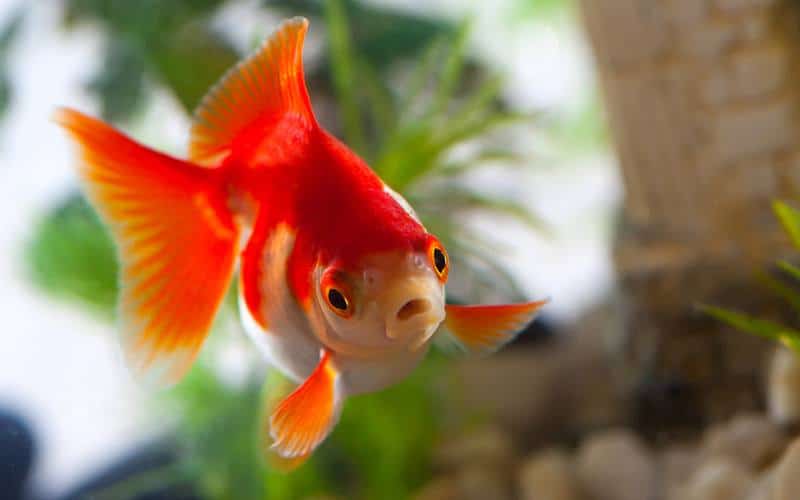 Secondly, they have different dietary requirements. Bettas are carnivores and Goldfish are omnivores, so you can’t feed them the same flakes without causing major issues.

Finally, Goldfish are dirty fish. They produce large amounts of waste that can quickly convert into Ammonia. Bettas are sensitive to poor water conditions but will become stressed if the water is cleaned too often.  There is no way to make this combination work out!

Can Gouramis Live with Betta Fish?

No. Although they are in the same family, Gouramis and Bettas are both aggressive fish and should not be kept together. There is a strong chance they will fight for territory, leading to serious injury.

No. Some people might recommend them as being suitable tank mates for a Betta, but it’s not a good idea. Like Goldfish, White Cloud Mountain Minnows prefer colder temperatures than Bettas at around 64 degrees F – 72 degrees F. This makes them incompatible in the long run.

Now that you know the fish compatible with betta, you can make an informed decision on whether or not you should add another fish to your aquarium.

Remember, it’s always better to err on the side of caution, and if you think your Betta can’t handle a tank mate, then let them live alone.

Bettas don’t need a companion to be happy, they need food, warmth, and safe water conditions. 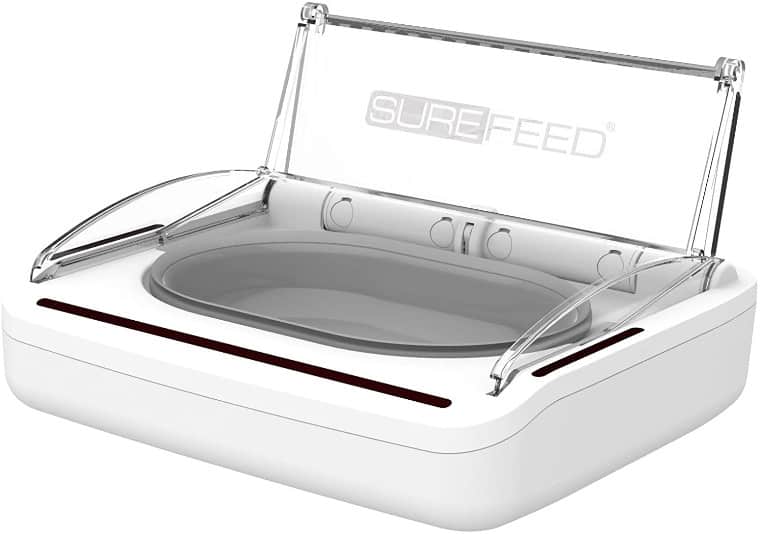