Helping to raise a litter of baby rats can be a rewarding experience. Not only will you get to see your beloved doe become a mother and watch her take care of her babies, you will get to witness the development of a baby rat from day one.

Before jumping into the world of breeding rats, there is some information you should familiarize yourself with first. A lot of changes happen in a rat’s first few weeks of life so it’s important you know what typical development for a baby rat week by week is.

You can choose the name you prefer – pup or kitten. The names aren’t gender specific and you could switch between the two names if you want to. For clarity, I will refer to infant rats as kittens throughout this article.

Litters Can Range In Size From 6-12 Kittens.

Rats are known for having large litters that range in size from 6-12 kittens. You can expect a healthy female rat that’s been well-cared for to give birth to a litter that’s on the higher side of this range.

In most cases, mama rats are naturally well-equipped to care for these many babies and shouldn’t need too much assistance from you.

Female Rats Can Give Birth 17 times In 12 Months.

Female rats or does become sexually mature as early as 6 weeks of age. This fact combined with a short gestation period of only 21 days, means they can produce 17 litters before reaching their first birthday.

Therefore, it’s important to separate sexually mature does and bucks because not only will you wind up with more rats than you can handle, this type of breeding is dangerous for the doe’s health and well-being.

Don’t Handle The Kittens For The First 24 Hours.

During the birthing process, it’s best to let the mother follow her own instincts and give birth alone. For the typical birth, you shouldn’t need to intervene but if labor lasts longer than 10 hours, you need to seek advice from a veterinarian.

It will be tempting to interact with the new kittens right away but unless there is a problem you need to give mama rat and her babies space for the first 24 hours.

1) Kittens That Aren’t In The Nest

Sometimes during the birthing process, the mother neglects to keep her babies in the same spot. This can be worrisome because kittens need the warmth of their litter to survive.

If this happens while your doe is giving birth, it is totally fine to gently move the newborn kittens into the mother’s prepared nest.

Newborn kittens develop a white band around their stomach known as a milk band. The appearance of this milk band is important because it will let you know if the kittens are getting milk from their mother. If you can’t see anything, there is a good chance the mother isn’t producing milk yet. In cases where the milk supply is threatened, you will need to get a “foster mother” doe who is still producing milk or begin a strict hand-feeding routine.

3) Mama Seems Disinterested In Her Kittens

In some cases, the mother rat will fail to develop an attachment to her kittens after birth. Instead of staying in the nest and nursing her newborns, the mother will leave her babies alone.

This is a heartbreaking thought, but you can help “force” a relationship by moving everyone into a confined space for a few days where the female must stay on top of the newborns. This will give the kittens an opportunity to nurse and get the warmth they need to survive.

The first weeks of life for kittens is exciting and full of change. They start their life reliant completely on their mother and in less than two months they’ll be weaned and ready to start their own young adult life.

Here is a run-down on the first six weeks of life. After six weeks, kittens are fully weaned from by their mother. At this point, they have reached sexual maturity and are now considered young adults.

When you first observe a litter of kittens, you will notice that they are completely pink and hairless. Their eyes and ear canals are sealed, and they are immobile. They rely on their whiskers for finding their mother’s milk and staying close to their siblings. A typical weight for a newborn kitten is between 6-8 grams.

It will take a few days for pigment to become visible on their skin; at this point you will start to have a good idea of their coat color and pattern. Around Day 5, their coats begin growing, starting out as adorable patches of peach fuzz hair.

Week two is an exciting week of changes.

First, you’ll notice that their baby coat of fur is almost completely grown. A dramatic change from their newborn appearance last week!

The kittens will begin developing their physical strength by standing and possibly taking their first steps towards the end of the second week.

You will also find that their outer ear canals are becoming more formed and open. At this point, kittens are no longer considered hearing impaired and will start identifying low frequency sounds. 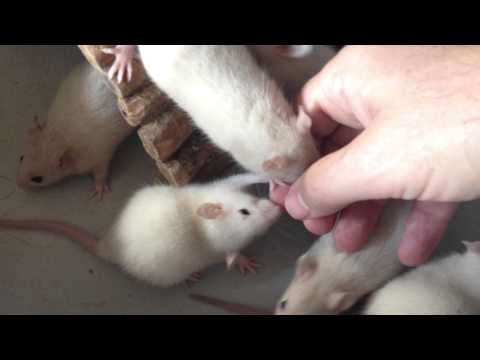 This is the week where you will notice that your precious babies are becoming independent balls of fluff!

At the beginning of the third week, kittens will start opening their eyes. Their vision is developed when their eyes first open, so they see their surroundings clearly. Rats aren’t known for their great vision, so they rely on their whiskers and excellent peripheral vision to guide them.

At this point of development, kittens are ready to be offered softened solid foods like pellets that have been soaked with water and pieces of banana. They aren’t weaned yet and will still need their mother’s milk.

This week is a big week. The kittens are nearly weaned and will become fully independent from their mother.

Your kittens should be fully mobile by now, and you’ll notice that they spend most of their awake time playing and exploring their cage. Their movements might seem clumsy at first but with practice they will become more coordinated.

Their fluffy baby coats will begin to disappear during this week and will be replaced with their adult coat with apparent guard hairs and under hairs.

Now that the kittens are almost fully developed, they should be getting most of their energy from solid food. They’ll burn this energy exercising their newly discovered independence to self-groom, dig, climb, and play with their siblings.

This week is important for developing social skills. It might sound silly, but rats are social creatures and need to learn social skills at an early age to exist with other rats peacefully. Kittens learn everything they need to know from playing with their brothers and sisters. 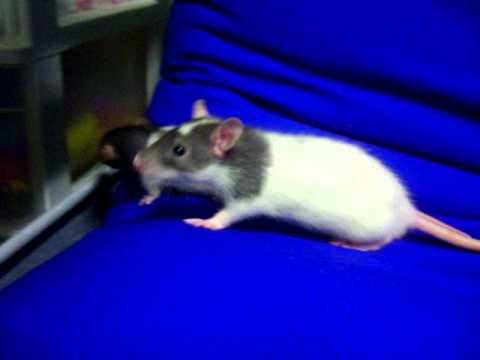 This has been a busy six weeks! The babies have grown from hairless newborns to fully-weaned and independent young adults.

At this stage, rats can become sexually mature so it’s imperative that the females and males from the litter have been separated. Luckily, this is when kittens are ready to go to their new homes so that might help with the stress of separating genders.

While the kittens have grown and are ready to be away from their mother, it’s important to monitor their growth for the next few weeks to ensure they are gaining a healthy amount of weight.

Now that you know what to expect when raising baby rat’s week by week, you should have a better understanding of their typical development and what they need from us.

Mama rats are usually enough when it comes to raising baby rats, but we will need to start helping during the third week by introducing solid food to their diet.

The baby stage is a quick one – so enjoy the cute little fluffballs while you can!