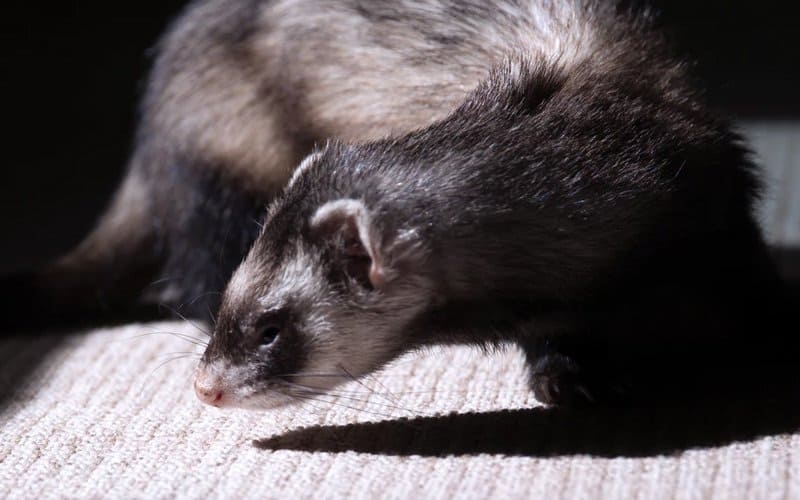 Ferrets are unique pets that can be easy to fall in love with due to their cute appearance and quirky personality. There’s a lot of information about keeping ferrets as pets that isn’t always completely accurate, but you do need to know that this pet is still a huge commitment.

Contrary to popular belief, ferrets are not a member of the rodent family. Scientists believe that domesticated ferrets were bred from European polecats or steppe polecats over 2500 years ago making them members of the weasel family (Mustela genus). Animals with lineage related to ferrets include badgers, minks, and wolverines.

2. Ferrets Should Be Spayed Or Neutered. 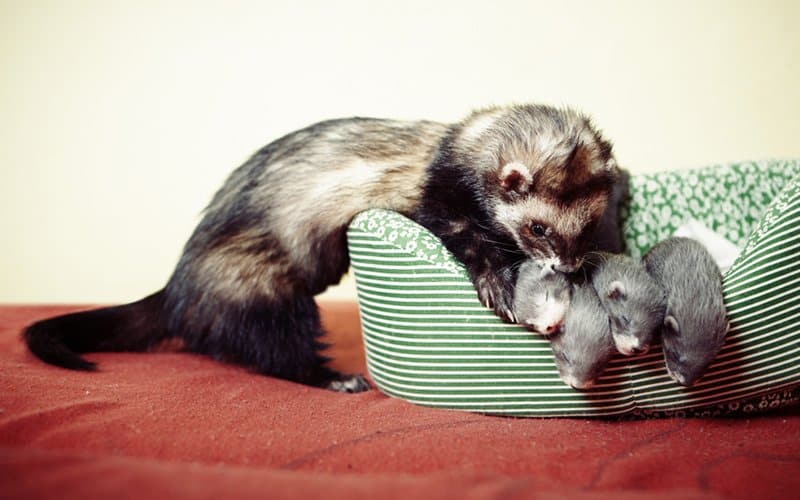 Most ferrets are sold fixed already – and for good reason. Male ferrets become aggressive after maturity and will even attack female ferrets while mating. Additionally, male ferrets produce a musky scent that is greatly reduced after becoming neutered.

The lifespan of a ferret falls between 5 and 8 years on average. However, with proper care and regular veterinary check-ups, ferrets can live to be 10 years old.

To encourage a long lifespan you should provide high-quality carnivorous food, plenty of exercise, and spay/neuter when your ferret reaches sexual maturity (around 7 months in both males and females).

One of the biggest myths surrounding ferrets is their aggressive nature and biting. Fortunately, this isn’t true but how your ferret is trained and cared for does have an impact on their behavior.

Ferrets need to be taught not to bite the same way a puppy does and will sometimes nip when excited. Other causes for biting are fear, pain, teething, and poor socialization. As mentioned earlier, intact males are aggressive but neutered males are usually friendly.

There is no way around it – ferrets are smelly animals. Male ferrets have extra hormones that produce their characteristic musky scent unless they have been neutered. Additionally, male ferrets are known to urinate on themselves to attract females for mating purposes.

6. Grapes Are Toxic For Ferrets.

Grapes are a tasty treat for humans but did you know they have a poisonous effect on pet ferrets? Consuming grapes (and raisins!) causes vomiting and diarrhea eventually leading to kidney failure. 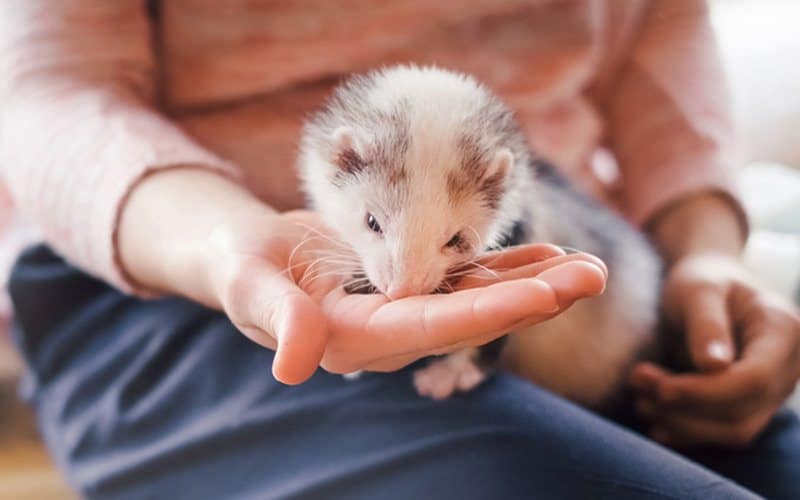 As a side note, all fruits and vegetables should be avoided because a ferret’s digestive system is not equipped to process complex carbohydrates. Ferrets are carnivores and should follow a strict carnivorous diet.

Don’t let their sleepy nature fool you – ferrets are active animals needing 3-4 hours of exercise outside of their cage everyday. This might seem overwhelming but you can split this time into shorter periods during the day to suit your busy schedule.

Before letting your ferret explore outside of their cage it’s a good idea to look for potential hazards and block off escape routes. Some activities ferrets enjoy include digging, obstacle courses, and climbing.

8. Ferrets Can Be Deep Sleepers. 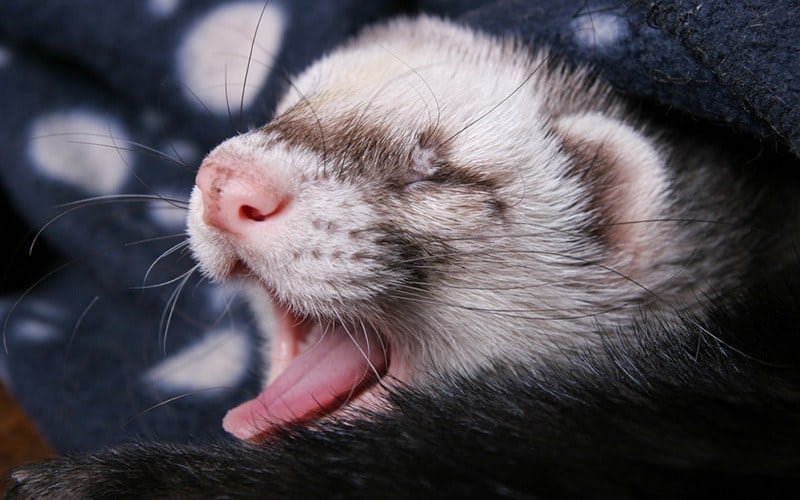 Ferrets are characteristically sleepy animals averaging between 18 and 22 hours of sleep per day. Occasionally, a ferret will fall asleep so deeply that it appears to have passed away. The ferret will appear lifeless, limp, and unresponsive to noise.

This event is called a “dead sleep” and it is understandably quite upsetting for new ferret owners. Don’t worry – this behavior is normal. However, if you notice a change in sleeping patterns and an increase in dead sleep occurrences, you should seek advice from your veterinarian.

9. Owning A Pet Ferret Is Illegal In Some Countries.

Before getting your heart set on bringing home a ferret, you need to check with local laws in your country or state. Although they have been domesticated animals for thousands of years, some areas of the world still consider ferrets to be wild animals or nuisances and have made it illegal to own them.

United States of America: Ferrets are illegal in Hawaii and the District of Columbia. In California, you can own a ferret after applying for a permit from California Department of Fish and Game. As of 1999, ferrets are legal to keep as pets in New York City.

New Zealand: Ferrets were once used to control the wild rabbit population in New Zealand resulting in the development of feral ferret colonies. For this reason, ferrets were made illegal to own, breed, and sell. Today, owning a ferret is no longer illegal but you are still not permitted to breed or sell ferrets while residing in New Zealand.

Australia: Ferrets are illegal in Queensland and Northern Territory. You are allowed to own ferrets in Western Australia, Victoria, New South Wales, and Australian Capital Territory but each country and territory has its own specific rules.

Europe: In Portugal you can use a ferret for hunting purposes but it is illegal to keep them as a pet. You can even be arrested if you are caught owning a ferret making it nearly impossible to access food and necessary veterinary care for those who decide to break this law.

If you are down with the flu it is a good idea to limit contact with your ferret until you are feeling better. Ferrets are susceptible to the same strains of influenza that affect humans and in rarer circumstances can pass the virus onto us.

Symptoms are similar to what we experience too – runny nose, sneezing, low appetite, lethargy, and fever. 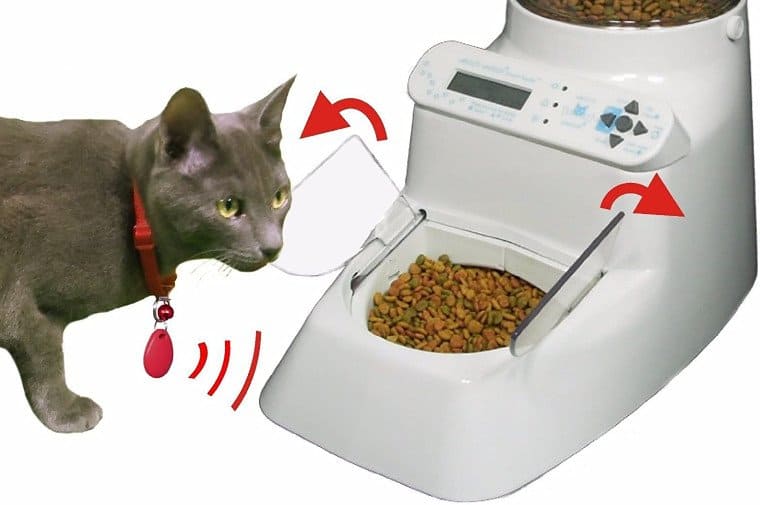